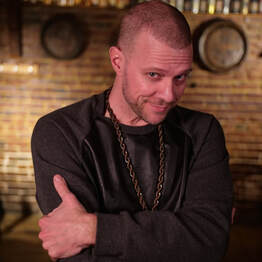 Since joining the circus as a professional clown at age 15 Dick Satori has continued pursuing his passion for performing comedy over the past 25 years. As a physical Comedian he’s worked with artists from Cirque du Soleil & performed on Broadway. He studied acting at The University of North Carolina School of the Arts, wrote and performed a one-man show off broadway, on Theater Row NYC, and Premiered his fourth solo-show, “Monkey Off Back – Circus Still In Town!” at SOLOCOM Festival after previews at The Firehouse Fringe in Richmond VA. Satori has toured his show across country in his tinyhouse tour van from StoryFestNYC and Emerging Artists Theater Festival off Broadway to Fringe PVD in Providence Rode Island, Atlanta Fringe Festival, Frontera Fringe in Austin Texas. He's proud to be an official selection at the South East Theater Conference Fringe Festival in Kentucky and will continue his North American tour with plans for UK and Edinburgh Fringe Festival followed by an off Broadway run.

Satori has performed in over 45 cities across America, 4 countries, and 1 Jail. He's worked with such artists as Hannibal Buress, Ahmed Ahmed, Rory Scovel, Nate Bargatze, and Eric Andre’. He recently featured for both Mike Gaffney and Craig Shoemaker in New York. Dick’s been a winner at comedy contests at The World Famous Comedy Store in Hollywood, The Fat Black Pussy Cat in NYC, Catch A Rising Stars in Princeton New Jersey, The New York International Clown Theater Festival, Cozzy’s Comedy Club, The Harlem Comedy Show, The Richmond Funny Bone, twice received the Will Rogers’ Comedy Award, and currently shares a Guinness World Record for Longest Comedy Show (with multiple comedians).

Dick has studied meditation and Dharma Art at the Shambhala Center of New York City for three years. He is a certified Yoga Teacher through Yoga Alliance, and is a certified facilitator of The Yoga of 12-Step Recovery (Y12SR). Satori also works part time as Peer Recovery Specialist, Recovery Speaker and advocate. He's proud to say, he will have six years of continuous long-term recovery from substance use disorder in February 2020.