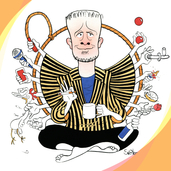 "Draws on his background in Standup Comedy, Circus Performance, Storytelling, & the Kitchen Sink to tell his story of recovery from drug addiction." -AUSTIN CHRONICLE  "His close to the bone comedy will have you in stitches!" -WKXS
NATIONAL- Dick Satori, an East Coast based Stand-Up Comedian and Actor, has developed his fifth solo comedy show, Monkey Off Back - Circus Still In Town!,  largely thru stand-up and a comedy variety circus arts. When people ask Satori how long he's been doing comedy he honestly has to answer, "somewhere between 5 years and 23 years." His professional comedy career began at the ripe old age of 15 when he joined the circus as a clown, juggler, roustabout, and the circus's youngest Independent performer.  Monkey Off Back - Circus Still In Town!, was workshopped as part of Richmond VA's award winning Firehouse Theater Fringe series October '15 and had it's World Premier in NYC November '15 as an official selection of SOLOCOM Festival; NYC's Only All-New Solo Comedy Festival. Satori is currently on a North American Tour which kicked off at the 23rd Annual Frontera Fringe Festival in Austin Texas and has traveled over 10 cities thus far. He was proud to part of Fringe PVD: Providence Fringe Festival in Rhode Island at The Wilbury Theater Group, and Official Selection of Emerging Artists Theatre's 25th Anniversary Celebration and New Work Series Off Broadway in New York City at TADA! Theater.

In 2020, Satori plans to take his show on the road Internationally including at the Edinburgh Fringe Festival.  The goal for the show is to culminate in an Off-Broadway (or Off-Off-Broadway) run.

MONKEY OFF BACK-CIRCUS STILL IN TOWN! is a hilarious yet cautionary tale of a boy who runs away to join the circus only to find himself in smokey church basements, rodeos, crack houses, and yoga ashrams.  It's a magically theatrical, radically fanciful, and fully bacchanal, show of a lifetime! (it’s autobiographical)  Dick has been a finalist at The Catch A New Rising Star contest in New Jersey and shares two Guinness World Record for Longest Stand-Up Comedy Show with multiple performers where he worked with the likes of Eric Andre' and Hannibal Buress in Nashville Tennessee. In developing his show, has performed his unique brand of comedy in nearly 40 cities across the USA and four countries.  As a variety artist he has performed on the Broadway stage as well as with Artists, Directors, and Founders of Cirque du Soleil.

Dick studied writing extensively at The Peoples Improv Theater Professional Writing Program in NYC, is a member of the James River Writers in Richmond VA and studied acting at University of North Carolina School of the Arts.  Dick has studied meditation and Dharma Art at the Shambhala Center of New York City for three years and is a certified Yoga Teacher through Yoga Alliance where he is known for interjecting humor in his yoga/meditation classes.  In addition to theaters and clubs, Satori continues to tour this inspirational comedy show to various 12 Step Recovery Conventions, Conferences, Colleges, Treatment Centers, fundraisers, and other related events. He’s a certified group leader of The Yoga of 12-Step Recovery (Y12SR) and Peer Recovery Specialist. He was selected as  a Facebook Leadership Conference Scholarship recipient for Mobilize Recovery and is a professional speaker and passionate recovery advocate. Comedy has played an instrumental part for Dick Satori healing from substance use disorder and he strives to make his unique story universal. Satori is proud to have almost six years of sustained long-term recovery from addiction.
### ​